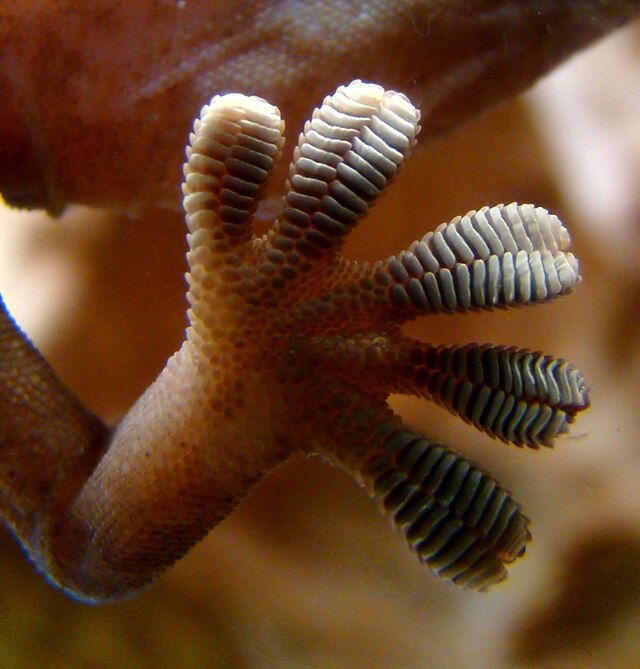 I’ve been active in “B3D” (biomimetics/biomimicry/bio-inspired design) circles for a while now, sporadically at least.  It was good to see an article about a deeper biomimetic design based on the wall-and-ceiling scuttling geckos in Science a couple weeks ago, and a TED talk a couple months before that.

I was recently asked to respond to a survey on the terminology in this field, and since I put some writing time (and perhaps even a little thought) into my responses, I thought I’d share an edited version of the questions and my responses with you.

What are the overlaps and differences between ‘biomimetics’ and related terms?

I see ‘biomimetics,’ ‘biomimicry’ and ‘biologically-inspired design’ as basically synonymous. I see them as fully overlapping (and I think working too hard to make distinctions will just lead to increasing confusion).

What is the origin of the term ‘biomimicry’?

I don’t think she was the first to use the term ‘biomimicry,’ but Janine Benyus’ role in promoting the concepts must be acknowledged.  I like that the etymology not only suggests the mimicry (copying) of life, but also resonates with the term ‘meme’ (as in an idea that replicates and is spread through social learning). (See Biomimicry 3.8 and Ask Nature to learn more.)

How would you define ‘biomimetics,’ ‘biomimicry’ and ‘biologically-inspired design’?

Who commonly uses the terms ‘biomimetics,’ ‘biomimicry’ and ‘biologically-inspired design’ and in what context?

2) Biologists, who study organisms and ecosystems from a functional perspective, with the intention of seeking solutions to human design challenges

How is the term ‘biomimetics’ perceived outside of the biomimetics community?

Right now, I think mostly with incomprehension until the basic principles are explained and examples given.  But I can usually get people to transition from “What’s that?” to “Of course,” in a matter of a minute or two.

What is the origin of the term ‘bionics’?

I’m not sure, but this one only ever makes me think of the

Six Million Dollar Man and the Bionic Woman (it’s a generational thing – I usually even hear the cheesy/cool sound effect in my head when I think of this term).

How would you define ‘bionics’?

I tend to see this as getting too easily confused with implant technology, biotech and ‘cyborgs’ to be useful to the biomimetics/biomimicry/bio-inspired design community.

Who commonly uses the term ‘bionics’ and in what context?

I’ve seen it used to refer to biomimetics/biomimicry/bio-inspired design in some commercial applications (I think the first PR piece I saw for the boxfish-inspired car).

How is the term ‘bionics’ perceived outside of the bionics community?

As mentioned above, I expect that it is often conflated with with implant technology, biotech, ‘cyborgs’ and other things popularized by science fiction in decades past.

What are the overlaps and differences between ‘bionics’ and related terms?

I know some feel it is a more succinct and high-tech sounding term, but I think it just adds to the confusion and should be discarded from applications better described by the previous three terms (biomimetics/biomimicry/bio-inspired design).

What is the origin of the term ‘Cradle to Cradle’?

I believe this was coined by William McDonough.  I know it was the title of a

fairly popular book he co-authored with Michael Braungart.  It is a play on the more familiar term of ‘Cradle to Grave’ consideration for persons, and then products (as a way of describing the entire supply-chain and waste impacts, for example in life-cycle analysis of a product).

How would you define ‘Cradle to Cradle’?

Cradle-to-Cradle (I prefer to use hyphens when treating it as a noun) is design that considers material cycling and its effects at all stages of production, use and post-consumer consequences.  It stresses closed loops for all items: biological nutrients being effectively and safely exchanged in cycles of growth, production, use and decomposition; ‘technical nutrients’ being safely extracted or reclaimed, then kept continuously in cycles of production, use and recycling without degradation (downcycling), toxic inputs or toxic outputs.  It seeks to ensure that there are no toxic effects at any point in this loop.

Who commonly uses the term ‘Cradle to Cradle’ and in what context?

McDonough and Braungart developed a Cradle to Cradle certification scheme  based on the concept.  It is used mostly by product designers and producers (although McDonough is an architect and certainly uses it in that context also).  I think users emphasize the non-toxic and design for effective recycling/composting aspects of the concept.

It is easily explained to novices. Since nearly everyone is familiar with the concept of recycling as being beneficial to the environment, it is generally well-received as being an extension of that.  The connection between ‘non-toxic’ and healthy is also very positively received by the general populace.

What are the overlaps and differences between ‘Cradle to Cradle’ and related terms?

It is largely a biomimetic/bio-inspired design concept, as it is founded in the model of nutrient cycling in ecosystems, and organisms’ abilities to produce materials without toxifying their habitat.  Interestingly, because the term is more accessible to novices, it need not be presented as a type of biomimcry, and I suspect many people superficially understand ‘Cradle to Cradle’ without ever considering its ecosystemic implication or origins.

Design for the Environment

What is the origin of the term ‘Design for the Environment’?

I do not know. It seems a fairly self-evident way to describe environmentally-friendly design.

How would you define ‘Design for the Environment’?

It appears to be a catch-all term for design that considers environmental effects.  To be truly useful and honest in its application, it should only include design that incorporates ‘Cradle to Cradle’ principles, rather than simply being slightly less bad for the environment than existing designs for the same purpose.

Who commonly uses the term ‘Design for the Environment’ and in what context?

I do not think I know anyone who does (though this may reflect the limitations of my professional/social circles).

Because of its self-evident explanation, I expect it would be easily and readily accepted with positive connotations by the broader public (since a preference for things that are better for the environment is a majority position, even among those who lack much understanding of what that means and how to achieve it).

What are the overlaps and differences between ‘Design for the Environment’ and related terms?

I suspect that ‘Design for the Environment’ might be used much more broadly, and encompass all Cradle to Cradle design.  It would encompass biomimetics/biomimicry/bio-inspired design only when those designs clearly lead to reduced energy, materials or toxicity compared to prevalent designs for the same functions.  I suspect it would also encompass such eco-efficiencies even when they do not conform to Cradle to Cradle or biomimetics/biomimicry/bio-inspired design principles.

Please enter other terms that should be included in a comprehensive B3D terminology document with a few words about why the term is important.  Include terms that are essential to understanding B3D, have different meanings/interpretations within the B3D community or where the usage is unique to the B3D community.

1) Sustainable/Sustainability: These are not my favorite terms, but they are in wide usage and have broad international understanding.  The ‘sustainability’ concept is contentious, and fraught with ambiguities (What are we sustaining? What time-scales should be considered?). Nonetheless, given its use in major international circles (e.g. UNESCO), it should at least be mentioned as one of the concerns addressed by B3D.

2) Biosphere: the globally interconnected set of ecosystems, that includes all humans and all the organisms and ecosystem services on which we depend for survival.  B3D should be both inspired by the denizens of and attentive to the health of the biosphere.

3) Organisms: those “individuals” of species whom we might study for inspiration.

4) Species: large sets of organisms with very similar adaptations and genomes, that experience the same pressures of natural selection.

5) Adaptation: a structure, system or process by which an organism improves its opportunities for survival and reproductive success within its ecosystem; the outcome of natural selection.