Because attribution of sources is a big part of good scholarship, I went looking for the original source of this quote (often phrased differently, but almost always attributed to Albert Einstein).

Ah, searching for “Einstein” and “level of thinking” rather than “same level of thinking” turns up a much earlier example from The Journal of Transpersonal Psychology, Volumes 1-4, which is dated 1969 by google books though these snippets show it contains pieces from 1969 and 1970. The quote, on p. 124, is “The world that we have made as a result of the level of thinking we have done thus far creates problems that we cannot solve at the same level as the level we created them at.” It’s prefaced by “Einstein said an interesting thing”, and the same phrase and quote appears in a 1974 book by Ram Dass (who needs his own wikiquote page!), The Only Dance There Is, on this page, so presumably the one in The Journal of Transpersonal Psychology is the same piece by Ram Dass.  [http://en.wikiquote.org/wiki/Talk:Albert_Einstein]

In the interview by Michael Amrine titled, ‘The Real Problem is in the Hearts of Men’ (New York Times Magazine – June 23 1946) Einstein says:‘Many persons have inquired concerning a recent message of mine that “a new type of thinking is essential if mankind is to survive and move to higher levels“.’ (p.7) 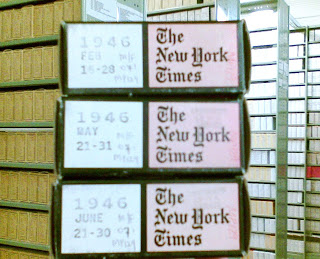 The source of that recent message is quoted in an article that appeared the month before titled‘Atomic Education Urged by Einstein‘ where the mircofiche archive copy of the article reports on an appeal by telegram to ‘several hundred prominent Americans’ on 24 May 1946 in a ‘Plea for $200,000 to promote new type of essential thinking’. The telegram was signed by the Emergency Committee of Atomic Scientists with Albert Einstein as Chairman and the Federation of American Scientists. The text of that telegram is quoted in part and reads:

‘Our world faces a crisis as yet unperceived by those possessing power to make great decisions for good or evil. The unleashed power of the atom has changed everything save our modes of thinking and we thus drift toward unparalleled catastrophe… a new type of thinking is essential if mankind is to survive and move toward higher levels… [http://icarus-falling.blogspot.sg/2009/06/einstein-enigma.html]

Of course, one can argue that the words and the source are not as important as the idea conveyed.  That notion that we have to think about things in new ways to resolve major problems is powerful.  I suspect that is why the quote is constantly rephrased and repeated, yet that essential message survives the transformations.