The fires in Indonesia  burn rainforest trees that have grown and fed and housed orangutans for decades or centuries, and peat that has stored carbon for centuries or millennia.  George Monbiot sums up the recent conflagrationary disaster in Indonesia that Southeast Asia has been breathing:

A great tract of Earth is on fire and threatened species are being driven out of their habitats. This is a crime against humanity and nature.

It is hard to convey the scale of this inferno, but here’s a comparison that might help: it is currently producing more carbon dioxide than the US economy. And in three weeks the fires have released more CO2 than the annual emissions of Germany.

It’s not just the trees that are burning. It is the land itself. Much of the forest sits on great domes of peat. When the fires penetrate the earth, they smoulder for weeks, sometimes months, releasing clouds of methane, carbon monoxide, ozone and exotic gases such as ammonium cyanide. The plumes extend for hundreds of miles, causing diplomatic conflicts with neighbouring countries. 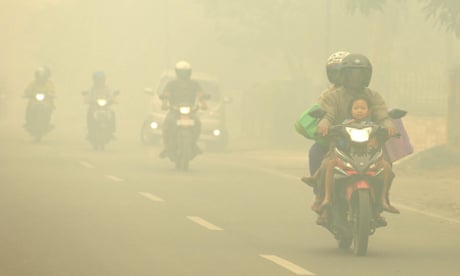 Indonesia burning: forest fires predicted to be worst on record

Why is this happening? Indonesia’s forests have been fragmented for decades by timber and farming companies. Canals have been cut through the peat to drain and dry it. Plantation companies move in to destroy what remains of the forest to plant monocultures of pulpwood, timber and palm oil. The easiest way to clear the land is to torch it. Every year, this causes disasters. But in an extreme El Niño year like this one, we have a perfect formula for environmental catastrophe.

Though Joko Widodo seems to want to stop the burning, his reach is limited. His government’s policies are contradictory: among them are new subsidies for palm oil production that make further burning almost inevitable. Some plantation companies, prompted by their customers, have promised to stop destroying the rainforest. Government officials have responded angrily, arguing that such restraint impedes the country’s development. That smoke blotting out the nation, which has already cost it some $30bn? That, apparently, is development. 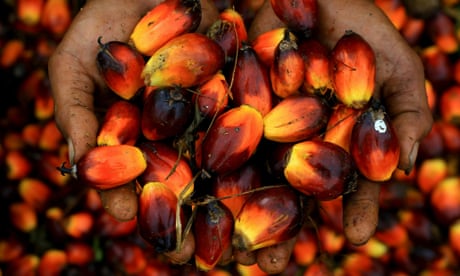 From rainforest to your cupboard: the real story of palm oil – interactive

Our leverage is weak, but there are some things we can do. Some companies using palm oil have made visible efforts to reform their supply chains; but others seem to move more slowly and opaquely. Starbucks, PepsiCo and Kraft Heinz are examples. Don’t buy their products until you see results.